This is a blog article from .royalqueenseeds.com

Cannabis is a plant full of highly valuable terpenes, cannabinoids, and flavourful resin. This blog describes different ways of extracting the desired compounds.

Concentrates have completely changed the way we consume cannabis. Although some types of hash have been around for years, the market for extracts has completely exploded in recent years. As a result, there are all kinds of new concentrates on the market today, offering brand new flavours, potencies, and effects.

In this article, we’ll take a brief look at the various types of cannabis extracts, how they’re made, and how they differ.

WHAT ARE CANNABIS CONCENTRATES?

Cannabis concentrates, as the name suggests, are made by concentrating the chemical constituents (cannabinoids and terpenes) found in cannabis. There are many ways to do this, but they all involve separating the trichomes from cannabis flowers. These trichomes are the small, sticky crystals you’ll find covering buds, and contain all the chemicals that give cannabis its unique characteristics.

There are several different types of trichomes found on cannabis:

These tiny trichomes are only between 25–30 microns tall and made up of only 1–4 cells. On mature plants, these trichomes will form a small bubble containing resin.

These trichomes are found in much higher numbers than bulbous trichomes. They are made up of roughly 8–16 cells and have a diameter of 25–100 microns.

Also known as glandular trichomes, these are the largest trichomes found on cannabis. They measure between 150–500 microns and are responsible for producing the majority of cannabinoids. These contribute the most to the production of extracts.

Concentrates arrive in many different forms, some of which are distinguished by their method of extraction, and others that differ based on texture alone. Let’s examine some of the most popular.

Kief is the simplest cannabis extract to make. It involves using sieves to separate trichomes from dry cannabis buds to form a fine, golden powder. This can be performed on a small scale using a multi-chamber grinder, or on a larger scale using a screen.

Hash is most commonly made by collecting this sifted kief, then heating and pressing it into dark, chocolate-like blocks.

Charas (known colloquially as finger hash) is made by rubbing live cannabis buds between the hands. The friction separates the trichomes from the plant and forms a thick, dark resin on the palms. This is then collected and rolled into spheres or “snakes” for consumption.

Bubble hash is made using ice water, agitation, and specialised bubble bags to remove the trichomes from frozen cannabis buds. Working at cold temperatures helps remove more trichomes while preserving many of the terpenes that are lost at higher temperatures. Plus, using water is a lot cleaner than using propane or butane. Bubble hash can vary in quality based on the size of the mesh used to collect the trichomes. The finer the mesh, the higher the quality. 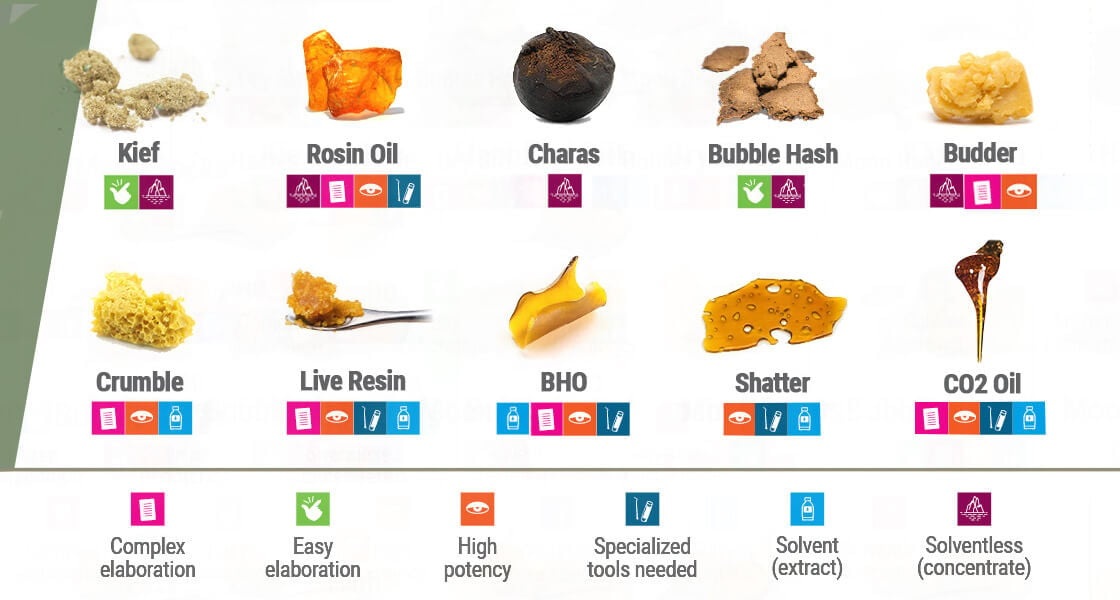 Full-melt extracts have been around for a long time, and are considered by many to be the creme-de-la-creme of extracts. These are solventless extracts, meaning they aren’t made with propane, butane, or CO₂, and are instead made by dry sifting cannabis or using ice water (not considered a solvent here) to separate the trichomes from flower and trim.

Full-melt extracts will, you guessed it, melt completely into a puddle when you dab them, without any contaminants (like chlorophyll or wax) burning alongside them. Lower-grade extracts, on the other hand, will still vaporize but leave behind residue. Full-melt extracts require using a very fine mesh filter to achieve the right consistency.

Not long ago, BHO (butane hash oil) was the latest craze in the world of cannabis concentrates. It’s made using liquid butane to separate trichomes from dried cannabis buds. The butane is then cooked off slowly to leave behind a super-concentrated oil. BHO is sold under various different names, including wax, shatter, crumble, budder, and more. These terms simply describe the texture of the concentrate, which can range from brittle and glass-like (shatter) to thick and creamy (budder) to a dense, sandy texture (crumble)—and basically everything in between. Users select different types of BHO based on their preference and the method of consumption.

Rosin is a solventless extraction method that uses heat and pressure to extract a thick, golden resin from dried cannabis buds. The easiest way to do this is to wrap a bud in wax paper and press it in a hair straightener for a few seconds. The more professional way is to use a specialised press, which gives you more control over the pressure and temperature you’re using, resulting in a higher-grade product.

Live resin, like BHO, uses a solvent to extract cannabinoids and terpenes from cannabis. The difference here is that live resin is made using fresh cannabis buds that are frozen right after harvest, rather than cured buds. The extraction also happens at below-freezing temperatures to create a super-rich extract, which then needs to cure for about two weeks. The result is an extremely potent extract that, like BHO, can have various different textures, and preserves many more terpenes and flavonoids than some of the other processes listed here.

A Closer Look At Solvent And Solventless Cannabis Concentrates

CO₂ extraction is by far the most advanced cannabis extraction method. It involves using supercritical CO₂ to extract cannabinoids and terpenes from cannabis buds. The resulting extract is then purged, producing a clean, golden oil treasured for its flavour and potency. The great thing about CO₂ is that it is a non-toxic solvent, and arguably produces some of the best commercial-grade results. That said, it is likely the most expensive method mentioned on this list.

Cannabis oils and tinctures are made by taking cannabis extract (usually CO₂ extract) and mixing it with carrier oils (like hemp seed and olive) or alcohol/glycerine. These supplements come in a variety of concentrations and may be specially formulated for a specific purpose or symptom.

The best Marijuana strains of 2020.